If you still have questions or prefer to get help directly from an agent, please submit a request.
We’ll get back to you as soon as possible.

What's a CSS selector? How does Appcues use CSS selectors? Why would I need to change a CSS selector in Appcues? Things to consider when adjusting selectors: When an element does not appear, this usually happens for four reasons: Missing elements Auto-generated (Dynamic) selectors Generic CSS selectors Selectors that change on empty state

For a deeper dive into the problem and solutions, check out reasons for elements not appearing below.

A CSS selector is a way to describe the location of one or more elements in an HTML page. It uses characteristics, such as IDs, classes, and other attributes, to create a breadcrumb trail to a certain element(s) in the HTML tree. For a deeper dive into CSS selectors, check out  How CSS Selectors Work.

How does Appcues use CSS selectors?

When you initially place a tooltip or hotspot in our editor, we capture a CSS selector for the element you are trying to annotate. We save the CSS selectors for each of those annotations so we can place them again later. You can think of CSS selectors as repeatable instructions for where your hotspots/tooltips/coach marks should go on the page.

When Appcues displays a tooltip or hotspot, it starts by scanning the page to locate the right elements to attach to (using the CSS selectors from the step mentioned above). As it does this, Appcues keeps track of which elements are present or absent from the page.

In some cases, Appcues requires that all elements are present on the page in order to start the tour. In other cases, a partial showing is ok. Any time an element is not present when we believe it should be, Appcues sends that information to our servers and shows that to you in our analytics. If an element is missing and does not display, it will show in the issues section of flow analytics.

Why would I need to change a CSS selector in Appcues?

The CSS selectors we capture are a set of directions to an element on the page. That means a tooltip or hotspot can become irrelevant and not show if:

Things to consider when adjusting selectors:

When an element does not appear, this usually happens for four reasons:

If you place a tooltip or hotspot on an element that doesn't exist in all instances, your flows will not show up when those elements don't appear.

For example, in the image below we have a tooltip placed on Project 2. If a user doesn't have two projects, the tooltip would not appear on this page as it would be seeking a CSS selector for the second project. 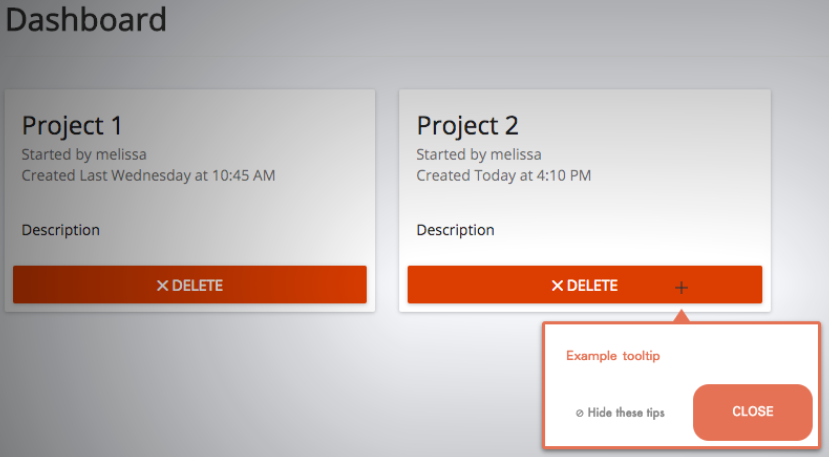 Sometimes your elements will be visible in all instances, but they might have dynamic or auto-generated attributes (classes, IDs, etc). In this case, elements in your HTML markup will look like this: 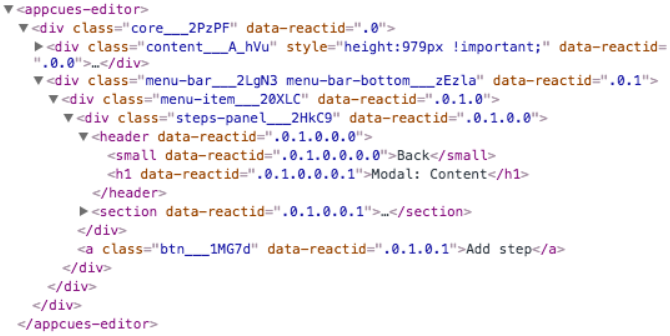 Auto-generated attributes (like "core___2PzPF" above are common in certain javascript frameworks like React.js and Ember.js. These IDs are randomly generated on each page load. As such, Appcues won't be able to automatically determine the best CSS selector to use when building your Appcues hotspots or tooltips.

In order to get your tooltips/hotspots to display properly, remove the auto-generated portion of the CSS selector.

In the Appcues editor, click on the gear icon next to the tooltip or hotspot you would like to adjust:

You will now see the auto-generated CSS selector is used to position your step. Here are instructions on other methods of representing an attribute. For instance, if you had the following CSS selector

You could replace the auto-generated portion by adjusting it to:

Alternatively, you can build your own selector from other attributes associated with the targeted element.  The Appcues editor will gather and list out the following attributes when available: HTML tag type, id, class, href, src, alt, title, type, name, and placeholder:

For CSS selectors that are too general and can be referred to more than one element on your page, tooltips or hotspots cannot identify which element to appear on and therefore will not show: 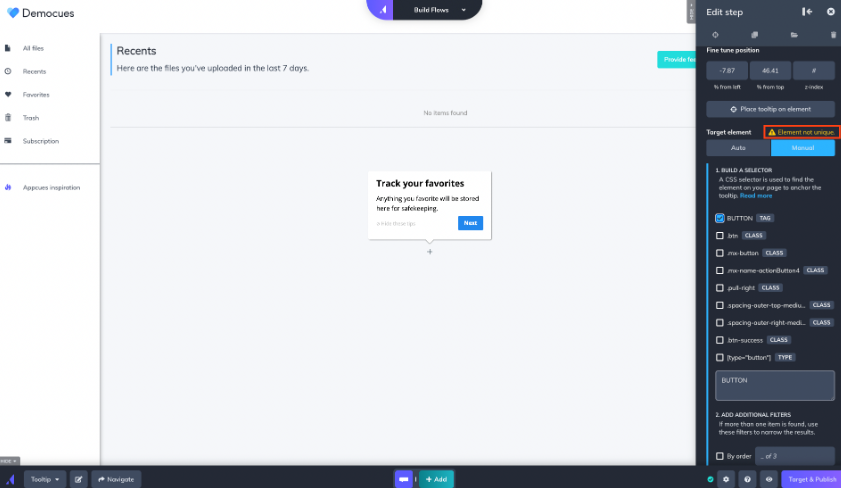 To get your flows appearing on the correct elements, identify a more unique selector by inspecting the element on your page. Once you have a more specific selector, click on the gear icon of the hotspot or tooltip you would like to adjust and then add the unique identifier in the Selector field, or select another attribute in the list: 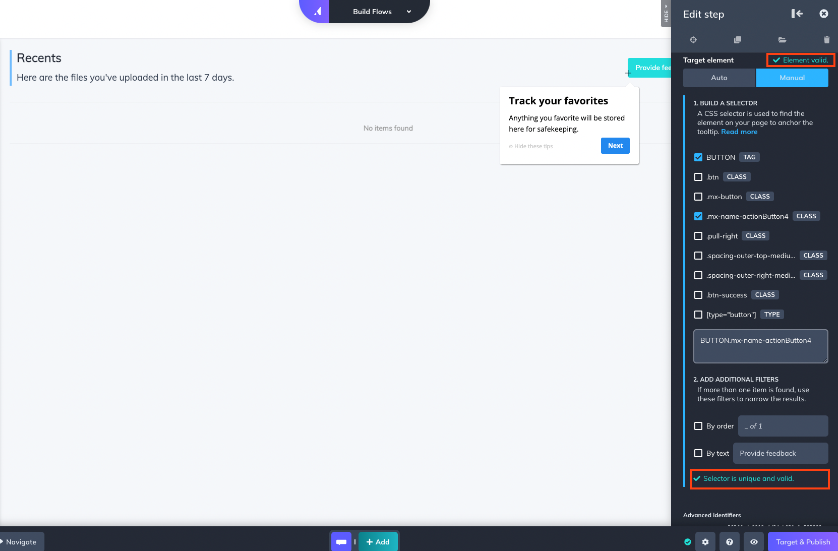 You can also select By Order if you have multiple objects with the same CSS header!

Messaging in the Element Selector will alert you that your selector, whether inputted automatically or manually, is 1) unique and valid, 2) valid, but not unique, or 3) not found. Choose a selector that is both unique and valid.  Save your new selector and preview your flow to make sure it works.

Selectors that change on empty state

Another thing to keep in mind is that a selector may be slightly different when someone looks at a part of your page in its empty state (vs with it populated). So be sure to run through the flow with a clean slate as a new user would and ensure that the selector is the same in both states. Usually, we find that in this case, there is some part of the selector that is consistent.

Please reach out to support@appcues if you have questions on the above.